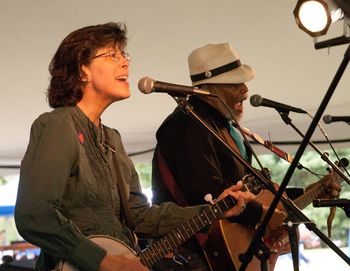 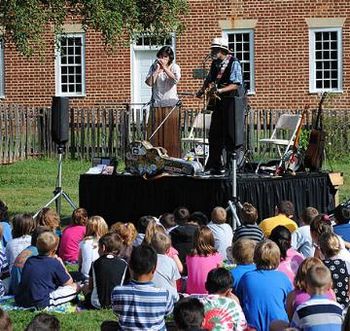 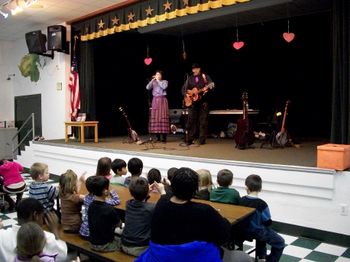 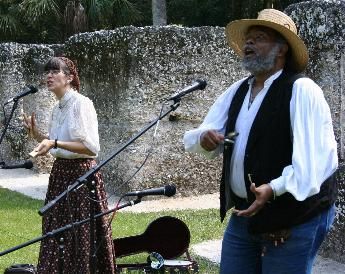 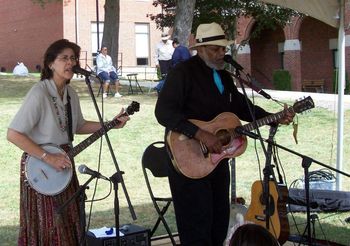 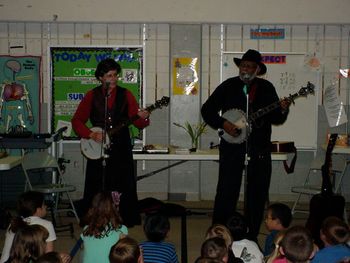 "The students and staff have only given me positive feedback on your presentation of the historical events in the journey of African Americans in our American History....Your humor and ability to relate to the student's current knowledge and experiences, made the presentations even better."
Faye Jenkins, Murray Middle School, St. Augustine, FL

"To entertain a roomful of 'rock-fed' teenagers for any length of time is no easy feat, as you well know. However, there was never any doubt that the students enjoyed themselves. As one student so aptly expressed it - 'That folk guy was awesome!'"
Elsa Johnson Bass, West Philadelphia University City High School, Philadelphia, PA

"You put on a great show and the students were engrossed. I can't remember a program that was educational and intriguing at the same time, not to mention great entertainment!"

"The Ruckers' performance was truly superb. The choice of music selections and the lively professionalism of their delivery kept the audience enthralled."

In addition to concert performances that include a variety of music, storytelling, and history, Sparky & Rhonda Rucker also give special presentations, workshops, and classes that are focused on a specific topic or aimed at a particular audience. Some of these are 45-60-minute presentations, while others are week-long classes. These programs, which are listed below, are available by prior arrangement.

HEROES AND HARD TIMES: AMERICAN HISTORY THROUGH SONG AND STORY

This educational program takes the audience on a journey that spans over three centuries of American history, including slavery, the Underground Railroad, the Civil War, the birth of blues music, and the civil rights movement. Each era is interspersed with stories and popular songs from the time period. The program is tailored to the audience and can be adapted for any age or grade level from preschool through college.

Welcome to Bombingham, a young adult historical novel by Rhonda Lynn Rucker (Pelican, 2019), is set against the backdrop of the Birmingham Children’s March in 1963. Through their hard-fought campaign, teenagers transformed public opinion and energized the civil rights movement. In this program, the Ruckers discuss how slavery and the Jim Crow South laid the foundation for the protests of the 1950s and 1960s. Singing authentic songs from the era, Sparky and Rhonda show how music bolstered the young people’s morale and helped them face fire hoses, police dogs, and dangerous mobs without resorting to violence.

Rhonda's picture book, Make a Change (Pelican, 2017), is about a boy's surprise at his first civil rights demonstration. It is based on an actual incident in Sparky's life, an experience that steered him toward a lifelong commitment to freedom and justice. In this program, the Ruckers first teach how slavery sowed the seeds for upheaval during the 1950s and 1960s. Music was an essential part of the civil rights movement, instilling courage into people who protested unjust laws. Using spirited songs from the era, Sparky and Rhonda present the story of the movement, including the young children who participated.

Rhonda’s historical novel, Swing Low, Sweet Harriet (Motes Books, 2013), was a finalist for the Crystal Kite Award, given by the Society for Children’s Book Writers and Illustrators. It is based on Harriet Tubman’s work as a spy and scout during the Civil War when she helped lead African American soldiers on the Combahee River raid in South Carolina. In this program, Rhonda and Sparky blend storytelling and music to help students learn about the Gullah Culture, Harriet Tubman, and the Civil War. The study guide that accompanies this program gives vocabulary words, background history, writing exercises, discussion topics, and recommended books to help expand learning opportunities.

FESTIVAL WORKSHOPS
(These can also be given as hour-long presentations):

In this program, Sparky and Rhonda demonstrate that the movements for justice have produced some of our most inspiring songs and stories. They trace the nation’s struggles from slavery and the Underground Railroad through the battles for women’s suffrage and workers’ rights and into the civil rights movement. Sparky got his start in folk music during the movement, marching shoulder-to-shoulder with SNCC Freedom Singers Matthew and Marshall Jones and playing freedom songs at rallies alongside such luminaries as Guy Carawan, Pete Seeger, and Bernice Reagon. In addition, he worked for the Poor People’s Campaign and helped to gain benefits for coal miners in Southern Appalachia. He brings an authenticity to the music that can only be obtained by first-hand experience.

STEPPING OUT ON THE MOUNTAIN (Ballads)

Sparky's research on the African-American ballad tradition culminated in the highly acclaimed recording, Heroes and Hard Times. Drawing on this material, the Ruckers share songs and stories about such colorful personalities as John Henry, John Hardy, Stag-O-Lee, and Betty and Dupree.

FOLLOWING THE NORTH STAR
(Slavery and the Underground Railroad)

This special historical program gives a unique perspective into the songs and stories of slavery, abolition, and the Underground Railroad. Personalities such as Frederick Douglass, William Lloyd Garrison, and Harriet Tubman are brought to life. Sparky and Rhonda sing the traditional slave songs that were filled with symbolism, messages of freedom, and sometimes even the information to guide the slaves' escape.

Sparky and Rhonda present a synopsis of the American Civil War through songs and narrative. They begin with the causes and events leading up to the war and touch on some of the highlights of the war. The stories, some sad and some humorous, reflect personal insights from the colorful personalities who participated in the war. Sparky and Rhonda give the history from the perspectives of both the North and South and also include the participation of the African-American soldiers.

Sparky and Rhonda share stories and songs from the rich heritage of their southern Appalachian roots, including the African American component of this culture. Their storytelling repertoire ranges from Jack tales and ghost stories to preacher tales and Br'er Rabbit stories. In addition to traditional Appalachian songs and gospel sing-alongs, their repertoire includes newer songs and stories from labor and coal mining struggles in the mountains.

BIRTH OF THE BLUES

Sparky and Rhonda each tell some "solo" stories, but Sparky and Rhonda also tell stories together (in tandem), always adding life and humor to the characters in their Br'er Rabbit tales, Appalachian yarns, High John the Conqueror stories, preacher tales, and family stories.

Sparky and Rhonda both have deep musical roots from the American gospel tradition. In this program, they explore their rich heritage of both black and white spirituals, giving an uplifting presentation that encourages the audience to sing along.

TOWARD FREEDOM AND JUSTICE

It has been said that freedom is a constant struggle. In this week-long class, we will explore songs and stories of slavery, the Underground Railroad, women’s suffrage, labor unions, and the civil rights movement of the 1960s. The Underground Railroad, the method by which enslaved West Africans escaped enforced bondage, produced a rich history and culture. However, the same songs were used in the civil rights movement a hundred years later, proving that the struggle for change is often slow – it’s evolution and not revolution. Many of the abolitionists continued the battle for justice until women’s suffrage was won a few decades later. Then the rise of unions showed that the struggle was not one of race or sex, but a universal struggle of the “haves” against the “have-nots.” In this class, students will find that the movements for justice have produced some of the most inspiring songs and stories in our history.

Sparky and Rhonda share stories and songs from the rich heritage of their southern Appalachian roots, including the African American component of this culture. Their storytelling repertoire ranges from Jack tales and ghost stories to preacher tales and Br'er Rabbit stories. In addition to traditional Appalachian songs and gospel sing-alongs, they'll also share newer songs and stories from labor and coal mining struggles in the mountains.

I'VE GOT A STORY TO TELL

In this week-long class, students get a chance to learn the art of storytelling. Sparky and Rhonda give tips for finding and choosing tales and discuss how to learn and critique a story. Students will get plenty of hands-on practice during the week. This class can be held for children or adults. If you have story ideas, bring them!

In this week-long class, Sparky and Rhonda explore the songs, skits, and history of the old-time minstrel show. This workshop delves into the politics and the social impact of this uniquely American phenomenon. It is taught as a week-long class that has been popular at music camps such as Ashokan, Common Ground, and the Augusta Heritage Center.

This is an introductory week-long class for people wanting to learn the basics of blues harmonica. Rhonda discusses cross harp in detail, and several beginning tunes are taught. Blues improvisation is discussed, along with techniques such as bending notes, chugging, trills, and specific blues riffs. Rhonda has taught this class at such places as Common Ground on the Hill, Augusta Heritage Center, Summer Acoustic Music Week, Clarion Folk College, and Puget Sound Guitar Workshop. Students need to bring a working diatonic harmonica (something like a "Marine Band") in the key of "A" for this class. If you have other keys, bring them to the music camp so you can participate in jams. A recording device is also helpful.

This week-long class is for students who already play piano but would like to learn some basic beginning blues-style piano. Rhonda explores several songs and blues styles during the week, teaching some left-hand and right-hand patterns, riffs, and fills that can be used in lots of blues songs.

In this week-long class, Rhonda introduces new players to the clawhammer style of banjo-playing, teaching the basic techniques and skills needed whether you want to play old-time tunes or accompany yourself in a song.